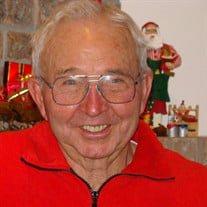 Richard (Dick) Lutz was the first child of a cattleman cowboy, born in Collinsville, Oklahoma on October 16, 1925. Early in life his father and mother moved the family several times to find work on ranches in Oklahoma, Texas, and Kansas. In the midst of the great depression, dust bowl storms forced another move. The family packed all of their belongings onto a flat-bed truck and set out for Washington State, landing first in Moses Lake and later establishing a small ranch up the Palisades. In those days, a small cabin, woodstove, fresh water and an outhouse were all considered luxuries. Through this experience Dick learned the values of self-reliance, thrift, and a tireless work ethic that he would carry with him the rest of his life. During his school years, the family moved to Rock Island. He attended Wenatchee High School, graduating in June, 1944 a few days after D-Day. He enlisted in the Army Air Corp a week later. He was assigned to pilot school in Texas but before he could earn his wings the war ended, stopping all pilot training. He was re-assigned to a base outside Chicago where he served until being honorably discharged. He returned to Washington State and enrolled in the Perry Institute Trade School in Yakima. On weekends he would travel back to Wenatchee to court his future wife, Betty (Highfill). After graduation he was hired as one of the first few employees at Van Doren Sales where he built a successful career over the next 30 years. Dick and Betty were married in 1949 and spent the next 70 years together as inseparable partners in every aspect of life. They raised a family and planted orchards in Wenatchee and Chelan. The opportunity to work at Van Doren Sales was a perfect match for Dick’s skills. He became a key problem-solver and trouble shooter on the Van Doren team, helping design, build, and install packing equipment for fruit warehouses from British Columbia to California. As one warehouse manager commented, “Whenever Dick finished everything in my warehouse ran better.” Dick was a tireless worker, seemingly racing the sun to see how much he could accomplish in a single day. Water would be changed at the orchard at dawn. He would then work his full shift with Van Doren Sales, return home for dinner and head straight to his orchards to work until dark. He was a notorious cat-naper, frequently falling asleep at the dinner table to catch a few precious minutes of sleep before waking refreshed and charging out to the orchard. A skilled builder, he was never without his small spiral notebook tucked into his shirt pocket. Sketches were made of farm implements and devices that he would later fabricate in his shop. He had a well-spring of inventions that he needed to capture on paper lest he lose the inspiration. When asked why he chose to build equipment rather than buy it, his response was, “I think I can make it better.” And he was usually right. Dick loved Lake Chelan. In the late 60’s he bought property on the lake and true to form started building. First came a massive dock, welded together piece by piece with channel-iron steel. Then he built concrete bulk-heads. Large retaining walls built by hand from concrete slabs came next, and finally the start of a house. All of which he built himself. His house on Lake Chelan was a slow project as nearly all his free time was dedicated to planting a large, new orchard in Chelan. The house had to wait. Single-handedly, he installed wells near the orchard, buried nearly a mile of pipeline, graded the land, grew his own apple trees in a nursery, and finally planted his orchard. It was a thing of beauty. He was a gifted mechanic. Virtually anything broken could be repaired and made better than before. It didn’t matter if it was a toaster, heat pump, sprayer, mower, truck, wind machine or even D8 Caterpillar tractor. As necessary, he would fabricate new parts on his metal lathe, weld up broken pieces, replace faulty parts and put it all back together. As he liked to joke, “Somebody built it, I’m smart enough to take it apart.” He was a dedicated family man and regularly challenged his children to be better. When one of his kids wanted to quit a difficult task because the challenge was too great, his frequent comment was “Can’t never accomplished anything.” He lived those words. Even though Dick did not attend college, he held a strong belief that education could save mistakes and get you much faster to where you wanted to be in life. Some of his proudest moments were watching his children and grandchildren graduate from WSU. He was a member of the Wenatchee Masonic Temple for over 65 years and served on the Board of Directors at Trout/Blue Chelan Fruit Co-op. Dick is survived by his by Betty, his life-partner and wife as well as his daughter Karen Lutz-McCutcheon (Don) and his son Steve (Jan), both in Wenatchee. He was so proud of his five grandchildren; Jessica and Steven McCutcheon and Richard, Taylor and Parker Lutz. He cherished every opportunity to see his grandchildren and loved seeing them perform in concerts, sports, and other school activities. Dick is also survived his sister Cleta Craig in Kalispell, Montana and brother David Lutz in Kennewick, Washington. He was preceded in death by his father William Henderson Lutz, his mother Mona (Cox) Williams and sister Margarite McPherson.

Richard (Dick) Lutz was the first child of a cattleman cowboy, born in Collinsville, Oklahoma on October 16, 1925. Early in life his father and mother moved the family several times to find work on ranches in Oklahoma, Texas, and Kansas. In... View Obituary & Service Information

The family of Richard L. Lutz created this Life Tributes page to make it easy to share your memories.

Richard (Dick) Lutz was the first child of a cattleman cowboy,...