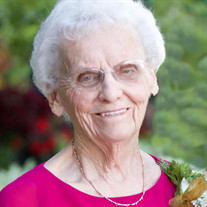 Rita Frances Priestley (Jacobs) died unexpectedly at her Wenatchee home on March 5 with her husband Clifford of 68 years (Wenatchee), her son Mark (Nadine) of California, and daughter Mary Ann Pitts (Marvin) of East Wenatchee by her side. She was 90. Rita was born to Frank and Helen Jakubiak on January 29, 1932 in Baltimore, Maryland where she lived until marriage. As a first generation American citizen born of Polish immigrants, Rita navigated a challenging bridge of language and culture with feisty determination. Rita was preceded in death by her parents, brothers Joseph Jakubiak and Frank Jacobs, and sisters Helen Jakubiak and Theresa Kilgour. Rita met her husband-to-be at a Baltimore dance pavilion. She landed in Cliff’s lap after tripping over his feet sticking out onto the dance floor. Dancing was a life-long love of Rita’s, and her family will always treasure the moments Rita shared dancing at family weddings. After marrying, Rita moved over 3000 miles to the high desert of Lancaster, California where they raised their two children. They remained in Lancaster until relocating in 2010 to Wenatchee, Washington to be near relatives. Upon moving to Lancaster as a newlywed, Rita met another young wife and mother Adrine Cobb who would go on to become her best friend and confidant for the rest of her life. Rita was a stay-at-home mother until her youngest child started school. She restarted her working career, first using her mathematical and typing skills as a keypunch operator, then using her incredible organizational talents as an office manager. She retired from Los Angeles County after 26 years. Following retirement Rita volunteered counting money at both Sacred Heart Church in Lancaster and St. Joseph’s Church in Wenatchee; she also helped at the Senior Center of Wenatchee where she enjoyed socializing. Rita’s greatest joy was her family and is also survived by people she made feel special on every birthday, Christmas and occasions in-between worthy of a thoughtful card, including: Ben (Anna) with great-grandchildren Nicholas, David, and Stella; David (Katie) with great-granddaughter Judy; Ryan (Allyson); Matthew (Carmen) with great-granddaughter, Malia; Alicia (John) with great-grandson, Henry; and grandchildren Claire and John. Upon moving to Wenatchee Rita gained a surrogate granddaughter Kati Lucas (Troy) of Wenatchee and great-granddaughters Brooke Lucas, Morgan Lucas and Taylor Reed all of Wenatchee. Rita will be remembered for her sweet-tooth and stash of See’s Candies, her care packages sent to grandchildren filled with fudge cuts, frosted creams & other requested sweets. Rita perfected her homemade German chocolate cake, and also hosted dinners for family & friends throughout her life where she often shared her Polish speciality Gołąbki a beef-stuffed cabbage roll, her beef stew or chicken with carrots. Rita was a devout Catholic and attended all her schooling at St. Elizabeth Catholic School in Baltimore. She was devoted to being the best Christian she could be which included converting her husband Cliff to become Catholic after 30 year of marriage. Rita is already missed, this remarkable person who was our wife, mother, mother-in-law, aunt, grandmother, great-grandmother or friend.

Rita Frances Priestley (Jacobs) died unexpectedly at her Wenatchee home on March 5 with her husband Clifford of 68 years (Wenatchee), her son Mark (Nadine) of California, and daughter Mary Ann Pitts (Marvin) of East Wenatchee by her side. She... View Obituary & Service Information

The family of Rita Frances Priestley created this Life Tributes page to make it easy to share your memories.