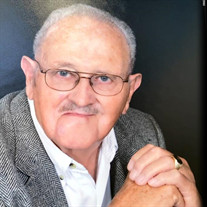 Robert Lee Allyn, 87, of Cashmere, passed away August 16, 2021 at Central Washington Hospital, with his wife and sons by his side. Bob was born in Brewster, Washington on April 4, 1934 to parents Robert and Anna Allyn. The family later moved to Monitor where he attended Monitor Grade School and then Cashmere High School. Bob served in the US Navy from 1951 to 1955. While this Navy Sailor was stationed in San Diego, he met his future wife, Alice Wagner. Thankfully this cute, adventurous young lady picked up a handsome young hitchhiking sailor. After their marriage and his discharge from the Navy, they packed up their car, cat and all and drove back to his family hometown of Monitor. While living in Monitor they were blessed with their three sons: Dale, Greg and Steven. They later moved to Cashmere for several years then found Lake Chelan and another career. Bob’s next challenge was a career calling as an insurance agent moving to Wenatchee. Bob enjoyed a good game of golf, a family of boats on Lake Chelan and his out of control motorcycle riding in the hills, tending his garden, and time with his family. Upon his retirement they once again moved back to their home in Cashmere. Bob and Alice found their Catholic faith a very important part of their lives. Bob’s later years were blessed with four grandchildren which he adored greatly. He was so proud of them. Bob is preceded in death by his parents, Robert and Anna Allyn. He is survived by the love of his life (as he would say) wife Alice of sixty-six years; sons, Dale of Cashmere, Greg (Jamie) of Malaga, Steve (Lacy) of Monitor; grandson, Steven (Shae) of Bothell; granddaughters, Jennifer (Jerome) Moore of Quincy, Tanner and Harper Allyn of Monitor; and a great-grandson due in September that he did not get to meet; sisters, Patricia (Jim) McConnell of East Wenatchee and Betty (Jerry) Harris of East Wenatchee; and several nieces and nephews. A memorial mass will be celebrated at Our Lady of the Assumption at a time and date to be determined.

Robert Lee Allyn, 87, of Cashmere, passed away August 16, 2021 at Central Washington Hospital, with his wife and sons by his side. Bob was born in Brewster, Washington on April 4, 1934 to parents Robert and Anna Allyn. The family later moved... View Obituary & Service Information

The family of Robert "Bob" Allyn created this Life Tributes page to make it easy to share your memories.