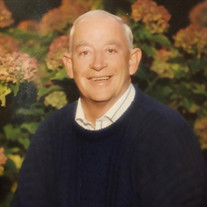 Robert passed away on January 23, 2021 of natural causes. At the time of death, Robert was surrounded by his children at his home in Wenatchee, WA. Robert was a third-generation Oregonian, born in Portland, Oregon on December 17, 1933.... View Obituary & Service Information

The family of Robert Clifton Benson created this Life Tributes page to make it easy to share your memories.