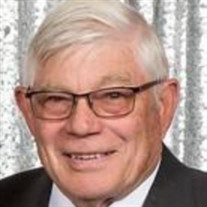 Robert (Bob) Dean Clements, 76 of East Wenatchee, passed away unexpectedly on July 1, 2020. Bob was born to Charles E and Peggy (Wallace) Clements on January 26, 1944 in Seattle, WA. He graduated from Waterville High School in 1962. After High school, Bob attended college and soon enrolled in the Army. While in the Army he married his first wife, Jean Nelson in East Wenatchee on May 21, 1966. Bob returned to college to finish his Business Degree from Eastern Washington University in 1967. He and his wife Jean moved back to Waterville where they raised their daughter Kim and son Chad. Farming was Bob’s passion. He began farming in 1969 until his retirement in 2014. He enjoyed hard work and long days in the wheat fields of Waterville. Bob would always know the current price of wheat – every single day! He was a member of the American Legion and was proud to put flags on the graves of Veterans in the Waterville Cemetery every Memorial Day for over 40 years. Bob served as a member of the Waterville School Board and on various Wheat Industry Association committees. During his life in Waterville he enjoyed camping with the Waterville Wranglers, horseshoes, golfing with buddies and silver fishing at Lake Chelan. In early 2010 his wife Jean passed away. Bob met and fell in love with Jeanette Greedy, an apple farmer from East Wenatchee. Bob and Jeanette were married in October of 2013. They enjoyed their time together and spent many summer days on the river in Plain and winters in Arizona. They had friends in every town they visited and always enjoyed a great game of cards and a cold beer. Bob was a wonderful role model for his children and grandchildren and will be especially missed by his wife Jeanette and dog Rudy. Bob is survived by his wife, Jeanette Greedy-Clements of East Wenatchee, sister Dawn Viebrock of Moses Lake, daughter, Kim (Jeff) Landon of Waterville, grandchildren Alexandrea, Dylan and Zoey, son, Chad (Jacque) Clements of Waterville, grandchildren Mitchell, Hanna and Justine, step-daughter, Deanna Bollinger and step-son, Brian Greedy of East Wenatchee, grandchildren Lily, Mia, Jewell and Emma. Bob is preceded in death by his parents, his wife, Jean and his brother, Ron Clements. Graveside services will be held on Friday, July 10, at 2pm at the Waterville Cemetery. Please join us to Celebrate Bob’s Life immediately following the service at the home of Chad and Jacque Clements, 905 E. Poplar, Waterville. Donations can be made in his honor to the Waterville Cemetery, P. O. Box 175, Waterville, WA 98858

Robert (Bob) Dean Clements, 76 of East Wenatchee, passed away unexpectedly on July 1, 2020. Bob was born to Charles E and Peggy (Wallace) Clements on January 26, 1944 in Seattle, WA. He graduated from Waterville High School in 1962. After... View Obituary & Service Information

The family of Robert D. Clements created this Life Tributes page to make it easy to share your memories.