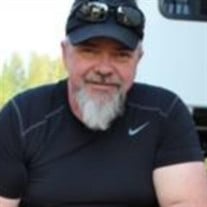 Robert William Hedges Jr. Obituary It is with great sadness that the family of Robert William Hedges, Jr., of Moses Lake, Washington announce his passing on August 4, 2020 at the age of 54. Robert was a devoted husband, father, grandfather, brother, nephew, and uncle who loved his family deeply. He was preceded in death by his parents Robert Hedges Sr. And Edith Prewitt. Robert is survived by his loving wife of 21 years Lupe Hedges; step-children Christina (Mark) Burker of Gig Harbor, WA, Andrea (Wade) Ritz of Honolulu, HI, Lupe (Justin) DeBeaumont of Okanogan, WA, and Michael Hedges of Moses Lake; siblings Suzan McCully of Fife, WA and Rhea Hedges of Vancouver, WA; uncles Hugh (Debbie) Prewitt of Tenino, WA, Jerry Phillips of Rock Island, WA, Terry (Kris) Phillips of East Wenatchee, WA; 8 grandchildren and numerous other family members. Robert was born on June 16, 1966 to Robert William Hedges, Sr. and Edith Prewitt. He graduated from Eastmont High School in East Wenatchee, WA in 1984. In his early 20’s Robert worked as a mechanic for his cousin Kim Wennerberg, a race car driver for Wenatchee Valley Raceway. This fueled his passion for both cars and racing. Robert loved rebuilding cars and enjoyed being the “go to” guy when anyone’s car needed repair. He was proud of his first car, a Ford Falcon, which he paid for on his own by picking cherries. In 1988, this passion drove him to pursue a long-lasting career as a store manager with Shucks and later O’Reilly Auto Parts where he was a steadfast leader and a mentor to his employees. Robert’s wonderful character and big heart was evident through his actions as a care-giver to his sister Suzan, grandma Ruby, and son Michael. In 1994, when Michael was only five years old, Robert adopted Michael and raised him as a single parent until he met the love of his life, Lupe, in 1996 . Robert and Lupe were married in Las Vegas, NV, in 1999 at the Chapel By The Courthouse. Together they built a life in Moses Lake, WA, with their beloved pugs, Max and Otis. They survived their beloved pugs Sassy and Buddy. Robert truly lived his life to the fullest through the simple pleasures, such as spending time with his family and grandchildren, camping, traveling to Europe, Alaska, Hawaii and his latest hobby fishing. Robert loved to help organize yearly family camping trips with the most recent trip to Leavenworth, WA. Robert was the family chef, which he loved. He leaves behind memories of him standing behind a grill cooking amazing meals. His macaroni salad was always a family favorite and frequently requested. Robert had the biggest heart for his family and friends and he will truly be missed. A funeral service will be held on Friday, August 14, 2020 at 12:00 p.m., Evergreen Memorial Park & Mausoleum, 1301 10th Street NE East Wenatchee, WA 98802. A Visitation will be held Thursday, August 13 3-7P.M. at Jones & Jones – Betts Funeral Home 302 9th St, Wenatchee, WA 98801. Due to social distancing, masks are required.

Robert William Hedges Jr. Obituary It is with great sadness that the family of Robert William Hedges, Jr., of Moses Lake, Washington announce his passing on August 4, 2020 at the age of 54. Robert was a devoted husband, father, grandfather,... View Obituary & Service Information

The family of Robert William Hedges Jr. created this Life Tributes page to make it easy to share your memories.

It is with great sadness...