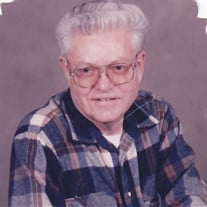 Bob Talley, a Wenatchee resident, passed away on May 20, 2019. He was born on March 15, 1933 at Sherwood, OK to the late Waymon and Laura Talley. In his early years growing up, he followed his family to Chelan, WA to pick fruit seasonally. He entered the US Army in 1953 and served in Germany receiving his Honorable Discharge in 1955. He settled in McKinleyville, CA where he met Laverta Whitfield. They were later married on April 27, 1956 in Arcata, CA. He worked at a sawmill in Arcata, CA and later at a plywood plant until it closed in 1977. They moved to Dryden, WA in 1978 (after he couldn’t find work in California) and bought an Orchard. He also worked at the Blue Bird plant in Peshastin, WA driving a fork lift. After his retirement in 1998, he was satisfied to work on his home place in Dryden and to help others when anyone needed help. Bob especially enjoyed his time with family and friends camping and hunting. Bob was a wonderful person and never met a stranger. He was very much loved by all. He loved animals and would keep most strays if he could. We will miss you Bob, especially your wisdom in a lot of things. He is survived by his wife, Laverta Talley of Wenatchee; two children, Belinda (Linwood) Tanner of Monitor and Stephen Talley of Berryville, AR; two granddaughters, Danielle Talley of Berryville, AR and Joanna (Daythan) Rolland of Wenatchee; one grandson, Bryan (Tasha) Talley; seven great-grandchildren; one brother, Earl (Linda) Talley of East Wenatchee; and many nieces and nephews; and a lot of friends. Bob was preceded in death by two sisters, two brothers, and a daughter-in-law, Mary Talley. Friends and family may visit Jones & Jones – Betts Funeral Home on Tuesday, June 11 from 4:00 pm to 6:00 pm. His service will be held on Wednesday, June 12 at 11:00 am at Jones & Jones – Betts Memorial Chapel. Interment will follow at Peshastin Cemetry. Should friends desire, memorial donations may be made to Christ Center Church, 206 Vine Street, Cashmere, WA 98815.

Bob Talley, a Wenatchee resident, passed away on May 20, 2019. He was born on March 15, 1933 at Sherwood, OK to the late Waymon and Laura Talley. In his early years growing up, he followed his family to Chelan, WA to pick fruit seasonally. He... View Obituary & Service Information

The family of Robert D. Talley created this Life Tributes page to make it easy to share your memories.