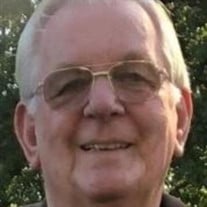 Rodney Armstrong was born in Wenatchee, WA to Cloise and Carol (Hess) Armstrong. He was the third of their four children. Rod grew up helping his dad in the family grocery stores and playing sports, including football at Wenatchee High School. After high school he enlisted in the Air Force and was stationed in Lincoln, Nebraska where he met the love of his life, Beverly Irvin. Rod and Bev married on September 1st, 1963 in Superior, NE. The Air Force led them to Great Falls, MT where they welcomed their daughter, Angie, in 1966. They traveled with the military to Turkey, New Mexico, and Colorado; eventually returning to Wenatchee to help Rod’s dad with the family business. In 1979 Rod started his own specialty advertising business, Progressive Marketing, which he worked hard at until he had a stroke in April 2021. When he moved into assisted living, he continued trying to work, even offering to make deals with the nurses and staff taking care of him and asking those who visited questions about his accounts. He loved his customers and considered them friends. His most important job was being a father and grandfather. He spent countless hours attending the various activities of his granddaughters. Every summer, he took the girls on trips to the Oregon coast or the midwest. He loved spoiling his grandkids and always found ways to make the most mundane things exciting. He had the chance to perfect his baby rocking skills with the arrival of four great grandchildren between 2017-2020. He loved cuddling and singing to the new generation. He was preceded in death by his parents Cloise and Carol, brother, Jerry, and his beloved wife, Bev. He is survived by his daughter Angie (Brian) Landes, granddaughters Tia (Ender) Demirkaya and Taylor (Josh) Mason, as well as great-grandchildren Ada and Aileen Demirkaya and Grady and Marlo Mason. He is also survived by his sister Laurie Lou Onstott of Alaska and brother Greg (Robin) Armstrong of East Wenatchee; as well as many nieces and nephews. We want to thank the staff at Caring Cottage for the love, support, and special care they gave him and our family during this time. We are forever grateful that he was at home with Miriam and the girls where he was adored. A graveside service will be held at the Wenatchee Cemetery on June 24th at 1:00 PM with a reception to follow at the family home.

Rodney Armstrong was born in Wenatchee, WA to Cloise and Carol (Hess) Armstrong. He was the third of their four children. Rod grew up helping his dad in the family grocery stores and playing sports, including football at Wenatchee High School.... View Obituary & Service Information

The family of Rodney D. Armstrong created this Life Tributes page to make it easy to share your memories.

Rodney Armstrong was born in Wenatchee, WA to Cloise and Carol...