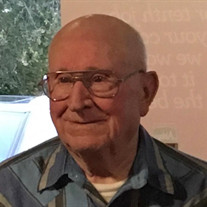 Roland D Schettler Roland Schettler of Waterville, was born November 15, 1934 in Noonan ND to Orville and Elvia Schettler passed away September 6, 2020. Roland and his brother Orville Jr. came to Waterville and lived with relatives, where he attended 6th grade. They returned to ND for a short period before the family moved permanently to Washington and the Waterville area. He fondly remembers his days spent working for Walter Madsen on Badger Mt. It was during this time, he met Vivian Armour and the couple married April 9, 1955. Their first home was at the head of Duffy Creek where Roland tended to a herd of horses, cows and chickens for A J Hensel. Daughter Cindy was born in the fall of ‘56 and that winter the young family got snowed in for 18 days while crews attempted to open the county road. During their isolation, they celebrated Christmas by opening presents early then tried not to spill the beans of the gifts they received. That next spring Roland went to work for J R Viebrock south of Waterville and in 1962, he went to work for the Douglas County Road Department as an equipment operator. During his 30 year career with the road department he learned and master the operating skills of many pieces of road building equipment. He was member of the volunteer fire department and a member of the Shocker Booster club while his kids were in school. During the summers he would take his vacation time and spending it working harvest for many local farmers that included, Kenny Ogle, Elmer Gray, Lloyd Petersen, Don Ogle, and Polson Farms. After his retirement from the County, Roland spent the next 15 years doing what he truly loved, working the land farming. Polson Farms provided him the opportunity to truly enjoy retirement. Roland was a master at making things work. He could problem solve with the best of them and his many inventions/creations kept him occupied. From home remodeling to tractor building there was little he would not attempt to make or fix. Roland and Vivian were blessed with 4 children, Cindy (Chuck) Garrett, Dwaine (Bobbi) Schettler, Joan (Charles) Voelker, and Carla (Ken Mitchell) Schettler. Grand children, Chad Schettler, Brooke (Evan) Casteel, Ryan (Kiera) Garrett, Anthony (Shelbea) Voelker, Jeremy (Jesslyne) Voelker. Great Grandchildren Phoebe Casteel, Cole Schettler, Brycen Garrett, Addison Voelker, Amelia Garrett, Wyatt Voelker, and Harper Voelker. Roland is also survived by his brothers Orville Jr. (Janice) Schettler and Harold (Renee) Schettler along with numerous nieces and nephews and several cousins. He was preceded in death by his wife Vivian of 63 years, his parents and an infant sister. The family wishes to thank the Waterville community for watching out and assisting Roland when it was needed most. Also Carolyn and Lee and the amazing staff at Acute Rehab who went above and beyond in providing care and understanding to him and the family. Memorials suggestions are to the Waterville Clinic and Ambulance or Douglas County Fire Dist.1. Graveside services will be held at the Waterville Cemetery on October 3, 2020 at 1:00 pm.

Roland D Schettler Roland Schettler of Waterville, was born November 15, 1934 in Noonan ND to Orville and Elvia Schettler passed away September 6, 2020. Roland and his brother Orville Jr. came to Waterville and lived with relatives, where... View Obituary & Service Information

The family of Roland D. Schettler created this Life Tributes page to make it easy to share your memories.

Roland Schettler of Waterville, was born...