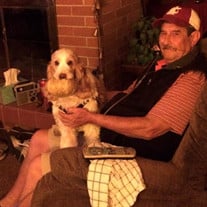 The Coffee Pot was always on. Russell B. "Russ" Gibbs was born in Wenatchee, WA, on February 23, 1945. He passed away on May 17, 2020, after an extended illness. Russ is a graduate of Wenatchee High School, class of 1963. He was a longtime... View Obituary & Service Information

The family of Russell B. Gibbs created this Life Tributes page to make it easy to share your memories.

The Coffee Pot was always on.

Russell B. &quot;Russ&quot; Gibbs was born...