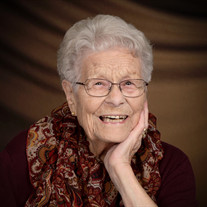 Our dear sweet Mother passed from her earthly home and entered into her heavenly home on April 27th, 2019. Mary "Ruth" Kellams was born on May 2nd, 1920, in Waterville, WA to John William and Ruth Isabelle Kellams. The family moved to Leavenworth, WA when she was a toddler. Ruth attended schools in Leavenworth and graduated from Leavenworth High School in 1938. Ruth met Robert "Ted" Avey and they married on June 9th,1938. They resided in the Wenatchee Valley for 12 years before moving to California for a better job opportunity. They lived in California until 1969, then moved back home to the Wenatchee Valley. While back in Wenatchee, Ruth began working as a cook in local restaurants. Later in her working career, Ruth cooked for the State of Washington DOT at the highway camp on Stevens Pass until her retirement. Ruth was well known for her amazing cooking, and her pies were especially coveted by the highway camp workers as well as her family. Grandma Ruth’s cookie jar was never empty. Ruth enjoyed many hobbies but her real joy in life was her family. She was a woman of great faith and lived it everyday. She loved unconditionally and did not judge. Ruth lives on in our hearts and will always be missed. Ruth was preceded in death by her parents, her husband Ted, her son John, and grandson John Jr., her brother Eugene, and her sisters Virginia and Glenda. She is survived by her son Eugene F. Avey (LaVonne), daughter Bette Merkel (Dennis), six grandchildren, and numerous great and great-great grandchildren, and her neices and nephews. Ruth's family would like to extend a sincere "thank you" to the staff at RiverWest Assisted Living, to Brett Hoerl ARNP, and to the Hospice Team who graciously cared for her during her final days. We appreciate their loving, respectful care of our Mother. A Celebration of her Life is planned for 11:00 am on June 7th, 2019 at the Wenatchee First United Methodist Church. In lieu of flowers the family asks that you consider a donation to our local Wenatchee Hospice organization (please make checks payable to: Confluence Health Foundation. 1020 N. Wenatchee Ave., Wenatchee, WA 98801)

Our dear sweet Mother passed from her earthly home and entered into her heavenly home on April 27th, 2019. Mary "Ruth" Kellams was born on May 2nd, 1920, in Waterville, WA to John William and Ruth Isabelle Kellams. The family moved to Leavenworth,... View Obituary & Service Information

The family of Ruth Avey created this Life Tributes page to make it easy to share your memories.

Our dear sweet Mother passed from her earthly home and entered...