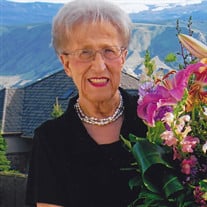 SHIRLI ANN (WAX) TANNEBERG EAST WENATCHEE, WA. Shirli Tanneberg, 89, passed away January 27, 2020 surrounded by her loving family. In the days preceding her death she was blessed with the opportunity to visit with family and friends from near and far. She was born in Hemingford, Nebraska on July 10, 1930, to Harold and Gladys Wax. The Wax family, including her younger brother Darold, moved to Wenatchee when Shirli was four, traveling across the country by train. Shirli essentially lived her entire full life in the Chelan/Douglas County area. She graduated from Wenatchee High School in 1948 and the family then moved to Mansfield to work in their newly acquired restaurant, The Mansfield Café. It was in Mansfield that Shirli met and fell in love with her future husband Jens Tanneberg Jr. Thanks to the matchmaking skills of Bill “The Barber” Henderson acting as cupid, they were married on July 8, 1950, shared 62 years of marriage and operated the family farm in Mansfield for 41 years, before retiring together in East Wenatchee in 1991. An active and enthusiastic member of the Mansfield and surrounding community, Shirli worked for several years at the Mansfield Mercantile, she packed fruit in the Fall, and she was the area Avon salesperson. She was a member of Rebekahs, the PTA, and the Mansfield Community Club, as well as a Cub Scout Den Mother. Shirli was known far and wide for the warm welcoming home she created. Family, friends and children of every age always knew they were welcome in Shirli and Jr.’s home. From the baseball diamond in the front yard, to the homemade cookies at the 7th inning stretch, Shirli always found a way to extend her particular brand of generosity and kindness to others. She had a strong faith in God and lived her life by his word. She was particularly famous for staying up late, initiating yet another game or two in the wee hours of the morning, and making sure her children were accounted for, home safe and sound. Scrabble was one of the games she excelled at and she found very few people willing to start a game of scrabble at 2:00 am knowing full well that they were going to lose. In her later years, Shirli’s 5 grandkids and 8 great grandkids were a constant source of joy as she took great interest in all their activities and poured love into them. She also poured pounds of candy into Halloween bags every year for the neighborhood children. Left behind to cherish her memory are her sons, Terry (Suzanne) Tanneberg, Seattle, Doug (Michele) Tanneberg, Mansfield, daughter, Pam Schamens, Wenatchee, her grandchildren, Shayne (Darcy) Poland, East Wenatchee, Chase (Katie) Tanneberg, Las Vegas, Matt (Nicole) Tanneberg, Scottsdale, Kelsey (Kailee) Tanneberg, Mansfield, Colby Rasmussen, Spokane, brother, Darold (Mary Ellen) Wax, Wenatchee, 8 great grandchildren, Hannah, Jens, August, Andrew Poland, Wyatt, Boone, Coy Rasmussen and Palmer Tanneberg. She was preceded in death by her parents, husband Jens Tanneberg Jr. and daughter in law Terry Tanneberg. A memorial service will be held Wednesday, February 5, 2020 at 11:00 am in the Mansfield United Protestant Church. Burial will be in the Mansfield Cemetery. A lunch, for all in attendance, will follow at the Mansfield Community Center. Viewing will be Tuesday, February 4, 2020 from 4:00 pm until 7:00 pm at Jones, Jones and Betts Funeral Home in Wenatchee. Memorials may be made to the Mansfield Museum, PO Box 274, Mansfield WA 98830 or the charity of your choice.

SHIRLI ANN (WAX) TANNEBERG EAST WENATCHEE, WA. Shirli Tanneberg, 89, passed away January 27, 2020 surrounded by her loving family. In the days preceding her death she was blessed with the opportunity to visit with family and friends from near... View Obituary & Service Information

The family of Shirli Ann Tanneberg created this Life Tributes page to make it easy to share your memories.