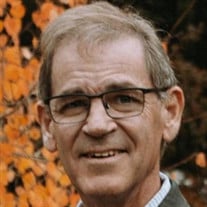 Stephen (Steve) Wiest lived a full life balancing family, friends, work, coaching and fishing. Steve was born in 1959 in Nelson, B.C., Canada. He spent his earliest years in a small community of Slocan Valley near Nelson, B.C. learning to play hockey on outdoor rinks. His family moved to Trail, B.C. when Steve was in second grade, and his parents still had the family home there until 2014. Steve made lifelong friends while in Trail and has returned to his home waters to fish with those friends often. Steve met his wife of 42 years, Sharon (Reidy), while studying Civil Engineering at Gonzaga University. Sharon and Steve moved to Denver, CO following their graduation from Gonzaga. Steve worked at the Bureau of Reclamation until 1995, and after he left, continued the friendships he made there with annual golf tournaments and hunting trips. Steve and Sharon enjoyed raising their 4 sons during this time in Colorado. (The last two children came later). Steve spent many an afternoon and Saturday coaching his sons' soccer teams or playing soccer himself and then mountain biking with the boys. In 1995, Steve moved the family to Wenatchee excited to have more waters to fish and for his work at the Chelan County PUD. He has loved the work and the friends he has made among the engineers, office staff, mechanics, wireman and technicians. He has worked downtown and at all 3 dams. The Wiest family made dear friends through their years particularly through their parish community at St. Joseph Church. Two of these friends have spent at least a week each year navigating the length of the Columbia River in the mahogany kayaks they each made together. They got from the Canadian border down through the Tri-cities before illness interfered. Steve also loved his buddies in the over-35 hockey league. With his brother Paul, he created an international invitational tournament in which the two over-35 teams played each other in Nelson, B.C (spring) and in Wenatchee (fall). In the early 2000s Steve and Sharon had two more children. This added more adventures and fun to their lives. Because the youngest has Down Syndrome, Steve started a TOP SOCCER program for her and her special needs friends. A different kind of coaching, but probably the most rewarding. Steve's long illness ended more abruptly than we expected. He spent his last days connecting with friends from Trail, Gonzaga, Bureau, church, hockey, Trail, the PUD, and extended family. His last week was spent with his 6 children and his wife. Steve is survived by his wife Sharon, his six children: Dr. Stephen Wiest (Nikki), Christopher Wiest (Morgan), Brian Wiest (Erika), Daniel Wiest (Tereza), Michael Wiest, Shannon Wiest, and his seven grandchildren, Jude, Dylan, Sophia, Misha, Liliana, Owen, and Louis. He is also survived by his two brothers Robert Wiest (Barbara) and Paul Wiest (Brenda) and numerous in-laws, out-laws, nieces and nephews. Steve is preceded in death by his father, Robert Wiest, mother, Mary Wiest, and sister Jean Wiest. Rosary, 7 PM February 17th at St. Joseph Catholic Church, 625 S. Elliott, Wenatchee. Mass of Christian Burial at Noon February 18th at St. Joseph Catholic Church In lieu of flowers donations may be made to upper Valley Connection or St. Joseph's Food Bank.

The family of Stephen "Steve" Wiest created this Life Tributes page to make it easy to share your memories.