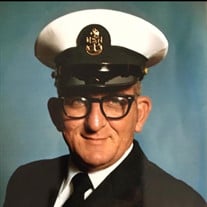 SWCS Laron “L” Leedy US Navy Seabees 1954-1984 May 30, 1935-November 10, 2021 Laron “L” Leedy passed away quietly at home November 10, 2021 at the age of 86 surrounded by his loving family and friends after a brief illness. Laron was born and raised in the Wenatchee Valley. He attended Wenatchee High School where he met the love of his life, Helen E. Scott, during their freshman year. Upon graduation in 1954, Laron became one of seven Wenatchee High grads to enlist in the United States Navy. After completing boot camp, Laron returned home to marry Helen on September 16, 1955 before leaving for his first duty station in Davisville, Rhode Island. He proudly served in the Construction Battalion, better known as the Seabees, for 30 years returning to the Wenatchee Valley following his retirement. In his 30 years of service to our country Laron was stationed in 31 different countries, including French Morocco, Antarctica, Newfoundland and in multiple states including places like Gulfport, MS; Great Lakes, IL; Pensacola, FL; Mare Island & Oxnard, CA and Pacific Beach, WA. He was serving in Guantanamo Bay, Cuba during the Cuban Missile crisis. He was with the State Department in the Philippines, Hong Kong and South East Asia. Laron received many medals during his time of service including, the Good Conduct medal seven times, Navy Expeditionary, the National Defense medal two times, Antarctic Service Medal, Armed Forces Expeditionary, Vietnam Service Medal and the Vietnam Campaign Medal. After retiring from the Navy, Laron drove school bus for Eastmont School District for 15 years safely transporting kids from preschool through high school. He also drove them to and from sporting events and field trips. Laron loved to travel with his family and after retirement, he and Helen continued the family tradition. They traveled across the country a few times in their motorhome and Laron could make friends anywhere he went. His hobbies included bowling and fishing and he loved to just take a side road just to see where it would go. Laron was a jack of all trades, always building or fixing things around the house. Laron and Helen could often be seen walking hand in hand, and they always toasted each other at meals. He loved her and his family above all else and was so proud of all of them. Laron is survived by his wife of 66 years, Helen E (Scott) Leedy, daughters Wendy (Rick) Navone & Toni (Michael) Mann; grandkids Morgan, Amanda, Melissa, Danielle, Kristin, Kelli, Amber, Kyle, and Michael Laron and great-grandkids; Loralei, Hayley, Logan, Abbie, Landyn, Peyton, Bethanie, Isaac, Jacob, Levi, Lennox, Jackson, Julia. Laron was preceded in death by his parents, three siblings, daughter Dawn Marie and grandson Forrest. Graveside service will be Friday, November 19, 2021 @ 2:00 pm at Evergreen Memorial with a gathering at his favorite restaurant Bob's Burgers and Brew following the service. You are invited to visit his online tribute at jonesjonesbetts.com. In lieu of flowers, donations may be made to the VFW 3617.

The family of SWCS Laron "L." Leedy created this Life Tributes page to make it easy to share your memories.