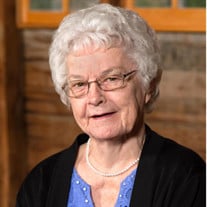 Thelma Leigh Gamble passed away Wednesday, August 4th at her residence following a brief battle with cancer. Thelma was born November 11th, 1931, in Chelan, WA, to Wayne and Elsie Walker. The family moved to Brewster, WA, when she was young. Thelma graduated from Brewster High School in 1949. After high school, Thelma married Don Whitinger in 1950 and they moved to Wenatchee, WA. Thelma and Don had three children, Vickie, Jerry, and Rod. In 1966, Thelma married Cliff Gamble in Wenatchee. Thelma and Cliff had one child, Jim. Thelma and Cliff spent the next 43 years residing in Wenatchee and building a home that became the centerpiece of their family. Thelma worked many years for Wenoka (Chief Wenatchee) in the fruit industry. She also worked as a cook at Colonial Vista and Christopher House. Thelma was an accomplished bowler in her younger years, and once held the Columbia Lanes women’s high score of 275. She was also a very active member of the Fraternal Order of Eagles, participating for over 50 years. In her later years, Thelma found much enjoyment in Bingo, the Seattle Mariners, and Gonzaga Bulldog basketball. Thelma always enjoyed her relationship with her children, which carried over to her relationship with her grandchildren. They could always make her laugh, and could occasionally make her mad as well. Always an adventure with Thelma. She will be missed. She was preceded in death by her father, Wayne Walker; mother, Elsie Walker; and husband, Cliff Gamble. She is survived by her daughter, Vickie (Larry) Nostrant of Lewiston, ID; sons: Jerry (Marcia) Whitinger of Lake Stevens, WA, Rod (Pat) Whitinger of Mossyrock, WA, and Jim (Chris) Gamble of Wenatchee, WA. Thelma is also survived by 6 Grandsons, 1 Granddaughter, 1 Great Grandson, and 1 Great Granddaughter. There will be a memorial service at Jones & Jones – Betts Funeral Home Saturday, August 14th, at 11:00 am. In lieu of flowers, Thelma has asked that donations be made to the American Cancer Society.

Thelma Leigh Gamble passed away Wednesday, August 4th at her residence following a brief battle with cancer. Thelma was born November 11th, 1931, in Chelan, WA, to Wayne and Elsie Walker. The family moved to Brewster, WA, when she was young.... View Obituary & Service Information

The family of Thelma L. Gamble created this Life Tributes page to make it easy to share your memories.

Thelma Leigh Gamble passed away Wednesday, August 4th at her...