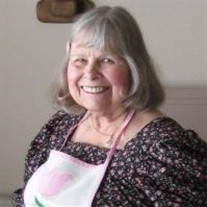 Theresa was born to Gerald and Elizabeth (Betty) Kerns on December 16, 1936 in Seattle WA. She attended Catholic elementary schools in Seattle and graduated from Cleveland High School. She attended one year at Seattle University where she majored in Education, was a cheerleader, and a 1955 Seafair Princess - Miss Capitol Hill. Seattle U was also where she began dating her future husband, David Harris. They were married in Seattle on June 9, 1956. In 1962 they bought their first home in the Madrona district of Seattle. David spent many hours updating and improving it, and Theresa made it beautiful with her special decorating touches. They had seven children over the next ten years and Theresa was a very busy and fulfilled wife, mother, and homemaker. Theresa and David's strong faith was a priority and they were active in St. Theresa's parish. Even though money was tight, they sent their children to the parish school. Mom instilled her love of books and music in her children as well. In 1969 David accepted a partnership in an Eastern Washington architecture firm, and the family moved across the Cascades to Wenatchee. In 1972 they built a house that David had designed for the family and have remained there to the present day. Theresa loved to sing and was a member of church choirs and singing groups throughout her life. She also enjoying dancing, was an avid reader and writer. One of her poems was published in a local book of inspirational writings. She was an artist as well, and sold note cards of her whimsical folk art drawings in local shops for several years. After David retired they spent many happy years sailing in their sailboat around the Washington coastline, and flying in small planes with David as the pilot. Always active in her church and children's affairs, Theresa was a vibrant member of the St. Joseph parish community and school for forty-eight years. She loved working with young children, and as her own children grew up and moved into adulthood she continued in many activities. She was a Brownie den mother, CCD teacher, a teaching assistant and reading tutor at St. Joseph school. She served as President of St. Damien's Guild for two terms, and was President of the Wenatchee group of Catholic Council of Women for one term. She was a volunteer store clerk at The Little Art Gallery, and volunteered in the store in St. Joseph's church. One of the activities that was most important to her was her weekly hour of prayer in the church chapel for the 24 hour perpetual adoration prayer group. She continued serving in this until very recently. Theresa's prayers and spiritual counsel brought comfort and hope to many people over the years. Theresa was preceded in death by her parents. She is survived by her husband of sixty-three years, David O. Harris and seven children: Michelle (Gene) Loudon of Wenatchee, Colleen (Colin Foden) Harris of Port Townsend, Kristy Harris of Wenatchee, Vicky (Jim) Fleishman of Bellingham WA, Nick (Lesah) Harris of Wenatchee, Jackie (Matt) Corulli of Bellevue WA, and Karen (Mark) Hayward of Redmond, WA. seventeen grandchildren: Beth (Michael), Stacia, David (Lynsey) Loudon, Nick (Laura), Michael, Mark (Rena) Boese, Mackie and Luke Fleishman, Jake (Mistaya) Johnston, Jordan, and TJ Harris; Zach Corulli; Anthony, Nick (Katie), and Sam Hayward; Clare and Madelaine Foden; and seven great-grandchildren: Carson and Bella Boese, Fiona Koenen, Miles & Bowen Johnston, Emery Loudon, and a new baby girl Boese arriving in April. She is also survived by special friends Jean Beers, Leanne Ryan, and Laura Ward. The words of a poem Theresa wrote express her philosophy of life: "Today I Will Try To: Put other people first, Bring happiness into other lives, Make people laugh, Enjoy the blessings of each new day, Carry the load of today only, Resist unkind thoughts about others, Be happy!!!, Not complain and find fault with others, Show lots of love to others, Love God above all, and love my neighbor just as I truly love myself." Theresa brought happiness, laughter, and love into the world around her until the day she went home to her Lord Jesus. A Rosary will be recited on Friday, January 24 at 7:00 pm at St. Joseph’s Catholic Church, 625 S. Elliott Ave, Wenatchee WA. Mass of Cristian Burial will be celebrated on Saturday, January 25 at 11:00 am at St. Joseph’s Catholic Church with entombment to follow at Evergreen Memorial Park Cemetery in East Wenatchee. A reception will follow at Kuykendall Hall at St. Joseph’s Catholic Church.

Theresa was born to Gerald and Elizabeth (Betty) Kerns on December 16, 1936 in Seattle WA. She attended Catholic elementary schools in Seattle and graduated from Cleveland High School. She attended one year at Seattle University where she majored... View Obituary & Service Information

The family of Theresa M. Harris created this Life Tributes page to make it easy to share your memories.

Theresa was born to Gerald and Elizabeth (Betty) Kerns on December...