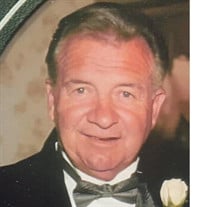 Anthony Beam "Tony" Peterson, lifelong resident of Wenatchee, passed away December 6th, 2021. He was born October 12, 1938 to Rollin “Pete” Peterson and Georgia Beam Peterson, and had two brothers: Arlo Peterson of San Antonio, TX (deceased) and Mark Peterson of Moses Lake, WA. Tony attended Wenatchee High School and Wenatchee Valley College prior to joining the US Army in 1961 and was stationed at Fort Greely near Fairbanks, Alaska with the Weapons Test and Evaluation Command. He was Honorably Discharged on August 31, 1967 and was a member of American Legion Post 10 in Wenatchee for many years. After the Army, Tony worked at Alcoa, Safeway, and managed the Auto Center at JC Penney prior to beginning his career in office supply sales at The Craftsmen Inc. where he worked with his cousin, Monte Cole, for many years. Tony married Betty Lou Bradshaw on July 16, 1965 and they had two sons: Todd Anthony Peterson and Tyler Lee Peterson, both of Wenatchee. Tony coached many of his sons’ youth sports teams, and later in life enjoyed boating on Lake Chelan and spending time with his friends at the American Legion He also had a love/hate relationship with the Seattle Seahawks. Tony is preceded in death by his parents, Pete and Georgia; his brother, Arlo; and his beloved Dachsund, "Annie." He is survived by his wife of 56 years, Betty Peterson; brother, Mark Peterson of Moses Lake, WA; son and daughter-in-law, Todd and Leslie Peterson, of Orondo, WA; son, Tyler Peterson of Wenatchee; grandchildren, Taylor (Peterson) Dockins and Brandon Peterson, both of Wenatchee; and great-grandchildren, Charlotte and Dawson Dockins, of East Wenatchee. A memorial service will be held at 1pm, Thursday December 16, 2021 at Jones & Jones -Betts funeral home in Wenatchee.

The family of Tony Peterson created this Life Tributes page to make it easy to share your memories.