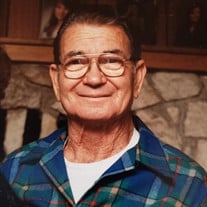 Victor Reese Stanfield died Nov 16 2019 at the age of 93. He was born in a little house in south Wenatchee at the end of the bridge on Jan 28 1926. The second of six kids born to E. Reese and Alice Stanfield. Vic grew up through the Depression and survived hard and hungry times. He made it through childhood and served in the Army from 1944-1946. He logged with horses along with his brother Bud, he drove logging trucks and worked at the sawmill, all the while working on cars and trucks trying to keep them running. He and the boys from Malaga had quit a time building race cars too. Vic married Barbra (Bobbie) Watson in June 1949. He started his own auto shop where he worked for over 70 years repairing anything with a motor. They had three sons, Victor, Gordon and Danny. Bobbie and Vic had 68 wild and wonderful years together until her death in 2018. Vic came from a different breed of man. He was the last of the OLD MEN OF THE MOUNTAIN. When not working he could be found up on Clockum hunting on the Bruton and fishing with friends from his youth: Alvin Morden, Glen Harris, Delbert and Glen England, Lloyd Combs, Bill Dorsett Sr., Norm Fulwiler, Louie Strong, and Ray Driver, They have left a wonderful tradition, with endless stories to tell, that their kids and grandkids will carry on for them with pride. Vic was a 5 foot 4 inch dynamo that was still racing his grand kids at age 69. He was a little rough around the edges and he cussed his way through everything. He said it made things work better. He was preceded in death by his wife, Bobbie; his parents, Alice and Reese; brothers, Marion, Arlo (Bud), and Larry Stanfield; and sisters, Alma Watson and Violet Daggett He is survived by his sister, Erma White; sons, Victor (Melissa) Stanfield, Gordon (Shannon) Stanfield and Dan (Joanie) Stanfield; five grandchildren; and four great-grandchildren A very special thank you to all the people who work for Confluence Health Hospice. As per Vic’s wishes, there will be no services.

Victor Reese Stanfield died Nov 16 2019 at the age of 93. He was born in a little house in south Wenatchee at the end of the bridge on Jan 28 1926. The second of six kids born to E. Reese and Alice Stanfield. Vic grew up through the Depression... View Obituary & Service Information

The family of Victor Stanfield created this Life Tributes page to make it easy to share your memories.