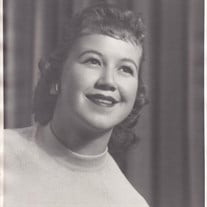 Wanda L Cook-Evans October 9, 1939- April 24, 2021 Wenatchee, Washington Wanda was born in Mt Pisgah Arkansas and moved to Chelan Falls Washington at the age of 11 where she finished her education and began working in the fruit industry. At the age of 20 she moved to Wenatchee where she met her first husband while working as a troller-skating carhop at the local A&W. They had 3 daughters that they raised together on their little farm up Squilchuck Creek. During the time her daughters were young, she was a homemaker and eventually went out into the workforce where she did various clerical jobs and supervisory positions in the fruit industry. In 1980 she met Ken Evans and they later married May 25th, 1996 in Coeur D Alene Idaho. They enjoyed traveling in their RV. Some of her favorite places to travel were the Washington coast and visit family in Arkansas. A few of her favorite things were raising her dogs, feeding and watching the birds in her yard, growing roses, collecting elephants specifically trunks up and watching her grandchildren and great grandchildren grow. Cooking and baking for her family was how she showed her love. She was a member of the Wenatchee Eagles (F.O.E.) Auxiliary #204 for 45 years. Wanda was strong, loving, caring, independent, funny, selfless and compassionate. These characteristics are reflected in her daughters who instilled these values in her grandchildren. Survived by her husband of nearly 25 years, Ken Evans of Wenatchee. Her three daughters Sheri Harrison (Rob) of East Wenatchee, Sheli Kane of Cashmere, and Staci Schuster (Neil) of Seabeck. Her Grandchildren Austen Helvey (Emma) of Riga Michigan, Gavin Schuster of Port Orchard, Paige Schuster of Seabeck, Shiann Kane of Cashmere, Madison Harrison of East Wenatchee And two great grandchildren Claire and Charles Helvey of Riga Michigan. Her three brothers James Griffin of East Wenatchee, Terry Griffin of Wenatchee, and Rex Griffin of Malaga. As well as numerous nieces, nephews, and extended family. Predeceased by her parents Robert and Zelma Griffin. Her sister Nona Heyen, niece Kelly Wolff and her youngest brother Jerry "Fuzzy Griffin. A graveside service will be held at Evergreen Memorial Park & Mausoleum 1301 10th St NE, East Wenatchee @ 1 pm Friday April 30th. All who wish to attend are welcome. In Lieu of Flowers please donate to your local humane society.

Wanda L Cook-Evans October 9, 1939- April 24, 2021 Wenatchee, Washington Wanda was born in Mt Pisgah Arkansas and moved to Chelan Falls Washington at the age of 11 where she finished her education and began working in the fruit industry. At... View Obituary & Service Information

The family of Wanda L. Cook-Evans created this Life Tributes page to make it easy to share your memories.