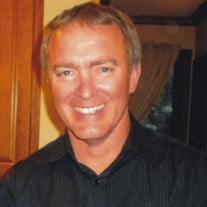 Warren R. Morgan, 60, passed away unexpectedly on May 16, 2019. He was born April 17, 1959 to Rex and Laurel Morgan in Soap Lake, Washington. He grew up in Quincy, Washington, graduated from Quincy High School in 1977 and from Washington State University in 1981. He returned to Quincy after graduating from WSU, where he lived until his death. His life as an entrepreneur began while he was still at WSU, where one of his first ventures was renting mini-fridges to college students. After graduating from WSU with a degree in horticulture, he came back to Quincy, and shortly thereafter, began working in his parent's orchard. The family orchard had been purchased in 1976 as a retirement investment, but it soon became clear that Warren was going to be a businessman. Instead of a retirement investment, the orchard eventually became one of a number of orchards that he owned and ran. In 1986 he and his father Rex were instrumental in establishing Double Diamond Fruit, which is an apple, cherry and apricot packing facility, and where he became President after his father retired from the position. On August 21, 1999, he married Heather Simmons, and later, they had two sons, Chase (now 18) and Connor (now 16). When the boys were young they decided to establish the Quincy Valley School, which continues today. After his marriage to Heather, Warren expanded the business, to include raising cattle, growing row crops and hay, and operating a cider plant and a small vineyard. Warren was very energetic and was strategic and analytical in making business decisions. He used that talent in serving on several boards, including those of Tree Top, CMI Orchards, the Quincy Basin Irrigation District, Mission Ridge Ski Team, and Quincy Valley School. Warren had many hobbies that he was passionate about. His love for waterskiing inspired him to build a waterski lake in George, WA., which was quite an undertaking. As an avid snow skier, Warren and his two boys loved their time together, skiing the slopes of Mission Ridge. He also enjoyed his many fishing trips with friends, where he could relax from his busy schedule, laugh with his buddies, and even catch a couple fish. In recent years, the family spent memorable time enjoying paddle boarding, and hopping on their wave runners and kayaks at their home in Idaho. A favorite activity was to hike or walk with Heather and their beloved dog, Sadie. Warren had a gift of quick wit and sense of humor that was magnetic. You could not help but be drawn to him. He was, without intent, the life of the party. He was a mentor to many, sharing his knowledge of his many business interests. He was extremely intelligent and quietly generous. As an organ donor, he continues to give the gift of life to several, and hope to many. He was truly a force, a one of a kind. He leaves this world a better place because he lived. Warren impacted so many lives, and he will be missed by all who knew him. He is survived by his wife, Heather; children, Chase and Connor; sister, Camille Morgan and her husband, John Stansell; brother, Walter Morgan and his wife, Esther, mother, Laurel Morgan; and nieces Madeleine Morgan, Amanda Panin, and Carolyn Stansell. A celebration of life service will be held at Columbia Grove Covenant Church, 19 McElmurry Ln, East Wenatchee, on Friday, May 31, 2019 at 2:00 P.M. In lieu of flowers, donations may be made to the Quincy Valley School, 1804 13th Ave. SW, Quincy WA 98848

Warren R. Morgan, 60, passed away unexpectedly on May 16, 2019. He was born April 17, 1959 to Rex and Laurel Morgan in Soap Lake, Washington. He grew up in Quincy, Washington, graduated from Quincy High School in 1977 and from Washington State... View Obituary & Service Information

The family of Warren R. Morgan created this Life Tributes page to make it easy to share your memories.