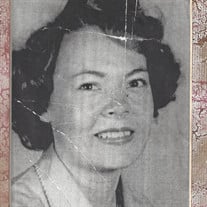 Willene Peart, 89, wonderful mother and grandmother, passed away peacefully and went to be with the Lord on Tuesday, November, 5, 2019. Willene was born January 9, 1930, to Tom and Prussia Martin in Ash Flat, Arkansas. Willene grew up on her family farm and graduated high school in Ash Flat. She moved to Wenatchee in 1949 and worked at Kresses where she met her future husband, Dale Peart, whom she married on December 2, 1950 in Coeur d’Alene, Idaho. They made their first home in Wenatchee and later moved to East Wenatchee in 1955 where she has resided ever since. She and Dale had three daughters and she quickly became a stay-at-home mother and homemaker for many years. Willene taught Sunday school and was greatly involved in her church. She was a PTO member and also a Girl Scout leader. She also volunteered at her children’s’ schools in numerous ways. Over the years she worked a variety of jobs and later began work at Wittes fruit shed, where she worked for 16 years until her retirement. There wasn’t a job she couldn’t do. She greatly enjoyed sewing, needle point, quilting, gardening, reading, watching the Mariners and spending time with her family to whom she brought tremendous joy. Willene was the heart and soul of her family, was totally selfless and always put her loved ones’ needs before herself. She will be missed by all who knew her. Willene was preceded in death by her husband of 49 years: Dale; her parents: Tom and Prussia; four sisters: Thelma, Marie, Hazel, and Jeanette; three brothers: Willard, Troy, and Ronald. She is survived by her daughters, Mary (Dale) Lathan of East Wenatchee, WA; Tami (Jim) Culp of Washougal, WA; and Debbie (Hans) Kwast of East Wenatchee, WA; three brothers: Edwin Martin and Donald Martin, both of Arkansas and Jack (Linda) Martin of California, and numerous nieces and nephews. Willene was blessed with six grandchildren: Sarah (Andy) Culp of Washougal, WA, James (Dena) Culp of Baker City, OR, Chelsea (Robert) Barbier of Georgia, Courtney (Shawn) Armstrong of East Wenatchee, WA, Zachary Lathan and Olivia Lathan of East Wenatchee, WA; and three great-grandchildren: Maliyah, Gracie and Blakely Culp of Baker City, OR. The family wishes to thank all of the Home Healthcare Hospice nurses and nurses at Central Washington Hospital for taking such good care of Willene over the past few months. A celebration service will be held on Friday, November 15, 2019 at 1:00 p.m. at Evergreen Cemetery in East Wenatchee, WA.

Willene Peart, 89, wonderful mother and grandmother, passed away peacefully and went to be with the Lord on Tuesday, November, 5, 2019. Willene was born January 9, 1930, to Tom and Prussia Martin in Ash Flat, Arkansas. Willene grew up on her... View Obituary & Service Information

The family of Willene Peart created this Life Tributes page to make it easy to share your memories.