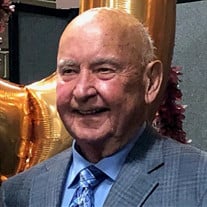 Bill joined his loving wife and partner, Portia, in heaven on Friday evening, April 15, with his two children by his side. Dad was a devoted and loving husband and a caring, supportive, and mentoring father. Besides Mom and his Lord, his greatest love and source of joy and pride was his six grandchildren who knew him only as Pops. Bill was born in Wenatchee on May 29, 1931 to parents Carroll A “Stub” and Doris Murray. After graduating high school, he attended the University of Washington before enlisting in the US Navy during the Korean War. He married his high school sweetheart and the love of his life, Portia, in 1952 during those Navy years. The couple was stationed in San Diego with Bill’s duties on a ship in the Pacific. They had their first child, Pam, while living in San Diego. When his Naval service completed the following year, the family moved back to Washington and Bill completed his college education at Western Washington University in Bellingham. The young family then relocated back to Wenatchee where Bill began his long career at Cedergreen Frozen Foods. He juggled multiple roles while working for his family’s business and also taking on the responsibility of providing for his young family. Son, Bill, was born in 1960, certainly adding to his work load. With his background in accounting and experience with the operations of the packaging plant and ice house, his versatility in the organization would eventually earn him the title of secretary-treasurer. When the company was sold in the late 1970s, he and cousins Jay and John Cedergreen embarked on the ambitious project of starting a new vegetable packaging plant, Columbia Foods, where he worked until his retirement. Bill loved his work and his family loved the corn on the cob fresh from the field in the summer! Bill and Portia had a strong faith in God and as a family we grew up regularly attending First Presbyterian Church. Bill served as an Elder in the church and Portia worked for a time as the secretary there. Bill’s Christian faith remained strong throughout his life and he continued to enjoy his weekly Bible study group even after he was no longer able to drive himself to the meetings. Bill took pride in his community and its residents. He believed this was the best place to live, best place to work, and best place to raise a family. His optimism made it really easy to grow up in this town. The world’s best apples were here with the best festival to celebrate that industry. He had married a beautiful Apple Blossom Queen and raised a daughter to follow in Queen Portia’s footsteps. Wenatchee also had the best high school football team around, and he developed a computer program that allowed him to provide the coaching staff with weekly scouting reports for their next opponent. This was years before his son would ever wear a Panther jersey. Bill was active in service groups such as Exchange Club and the Applarians. We recall cold days at Morris Park for Christmas tree sales and hot summer trips escorting Apple Blossom Royalty to their next parade. Bill was a past president of Little League baseball and organized the installation of an in-ground sprinkler system at the ballpark while serving in that role. Ironically, he was still dragging his hoses around his own yard until the irrigation water was shut off last fall. Bill didn’t just love his town – he was willing to put in the effort to make it better. In spite of long hours at work and his time spent in the community, Dad’s priority of family-first was never in question. He cherished his time with both kids and grandkids and had close relationships with his two brothers, Tom and Jeff, along with their families. He loved get-togethers and big meals with as many relatives as we could round up. We knew Dad was at his happiest with his grandkids splashing in his pool and Mom carrying out a big tray of food and drinks from the kitchen to serve the gang! Bill is survived by his brother, Jeff Murray (Julie); sister-in-law, Sue Murray; son, Bill Murray (Jodi); daughter, Pam Erickson; six grandchildren: Brooks (Masha), Graeme (Dani), Josh Erickson, Alex, Matthew, and Jessica Murray. Bill was preceded in death by his brother, Tom, and earlier this year, by his beloved wife, Portia. A funeral service for Bill will be held at Jones & Jones-Betts Chapel, 302 9th Street, Wenatchee, WA, on Monday, May 2, 2022 at 11:00 a.m. A graveside service will follow at Wenatchee Cemetery. In lieu of flowers, feel free to donate to Wenatchee Little League, Wenatchee Panther football, or an organization of your choice.

Bill joined his loving wife and partner, Portia, in heaven on Friday evening, April 15, with his two children by his side. Dad was a devoted and loving husband and a caring, supportive, and mentoring father. Besides Mom and his Lord, his greatest... View Obituary & Service Information

The family of William "Bill" C. Murray created this Life Tributes page to make it easy to share your memories.

Bill joined his loving wife and partner, Portia, in heaven on...