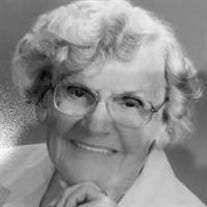 Wilma (Bowers) Stellingwerf was born on November 24, 1925 to Roy Richmond and Freda (Seiler) Bowers. She spent her first 22 years living on the family farm in Ellensburg with her younger brother and sister, Roy Vincent and Jessie Ann. She graduated from Ellensburg High School and attended Central Washington University. In 1947, she was granted an Emergency Certificate to teach at Whitman School in Wenatchee. She later received her Teaching Certificate from CWSC (CWU) and attended additional classes to become a librarian. She taught 5th grade at Whitman School and later became a librarian where she continued sharing her love of learning and books at Washington Elementary. According to Gloria Waddell and Bev Jagla, both retired educators and former 5th grade students, “Mrs. Stellingwerf was known for treating all her students with respect and kindness and was known for being Warm, Inspiring, Loving, Motivating and Amazing (also known to her friends as W. I. L. M. A.).” She retired from formal education in 1977. Wilma married Harold M. (Hal) Stellingwerf on August 31, 1951 at her childhood home in Ellensburg. She often told the story of writing out S T E L L I N G W E R F for the first time on the blackboard and laughed that her 5th graders thought she would never stop writing. Hal was a general contractor and built their home on Second Street in 1957 where Wilma lived 62 years until her passing. Wilma was proud of the “house that Hal built” and had many gatherings under her covered patio. Wilma strongly believed in giving back to her community. She delivered Mobile Meals for 35 years, first with her husband Hal and later with various friends as co-pilots. She retired from delivering meals at the age of 91. She volunteered at the Wenatchee Valley Museum and appropriately took charge of school tours. She served as President for both Delta Kappa Gamma, Zeta Chapter and the Chelan-Douglas Retired Teachers. She volunteered for the American Red Cross and the Election Board. She was a member of the Saddlerock EPC/First Presbyterian Church for 70 years. She loved the outdoors and spent as much time as possible outside. She and Hal loved to go for long car rides and explore the old dirt roads between Wenatchee and Ellensburg. Wilma and Hal loved bird watching and wild flower identification. They also liked to hike and mountain climb. Hal passed away in Wilma’s arms during their last hike together on a warm spring day in 1988. Wilma continued to explore the outdoors, joining the Wenatchee World hikes and attending Fall Colors each year at Stehekin. Her last trip to Stehekin was this last October. She rarely missed her daily walk around her neighborhood. Wilma couldn’t pass up a perfect pinecone, an interesting leaf or the occasional feather. She also couldn’t pass by litter because she loved the beauty of the unblemished outdoors. Wilma was preceded in death by her parents, husband, siblings, nephew, Brian I. Bowers and many other treasured family members and friends. She is survived by her sister-in-law, Floridel Bowers and three generations of nieces and nephews: Lon (Nita) Bowers and family, Don (Sheri) Bowers and family, Marilyn Bowers Minton (Rick) and family, and Chris Bowers and family. She was a cherished auntie and friend and will be dearly missed. Please join us in celebrating Wilma’s life on Saturday, December 14, 2019 at 2:00 p.m. at Saddlerock Evangelical Presbyterian Church, Wenatchee, Washington. In lieu of flowers, please choose your favorite charity or the Building Fund for Saddlerock Evangelical Presbyterian Church.

Wilma (Bowers) Stellingwerf was born on November 24, 1925 to Roy Richmond and Freda (Seiler) Bowers. She spent her first 22 years living on the family farm in Ellensburg with her younger brother and sister, Roy Vincent and Jessie Ann. She... View Obituary & Service Information

The family of Wilma E. Stellingwerf created this Life Tributes page to make it easy to share your memories.