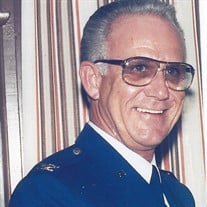 ****Please click link to view service**** https://www.youtube.com/watch?v=pCZk13AWxHM Wilton was born in Pascagoula, Mississippi on April 2, 1937 to Ford and Elma Carter. He passed away on Sept 5, 2021 from cardiac arrest. He was pre-deceased by his parents, an older brother A.F. Carter Jr and his 18 year old son, Jason. Wilton had three children, Craig, Konni and Kara. He graduated from the University of Southern Mississippi in 1959 and received a Master's Degree at Candler School of Theology, Emory University, Atlanta, Georgia in 1962. He served as a United Methodist minister in Florida before entering the Air Force as a Chaplain with the rank of Captain in 1968. During his military career, he served at several military bases in the United States and had overseas assignments in Thailand, Japan, and Germany. He retired with the rank of Colonel from Langley Air Force Base, Virginia where he served as Installation Staff Chaplain in 1989. During his Air Force career, he was awarded the Vietnam Service Medal, the Air Force Commendation Medal, the Meritorious Medal, and the Legion of Merit. Following his military retirement, he attended Azusa Pacific to get his degree in Family Therapy and later he served for 10 years as a licensed Psychotherapist at Mental Health Centers in Oregon, Wyoming, and Utah. In 1999, he went into full retirement and became a “stay at home Dad" allowing him to become involved in his then 8 yr. old son's activities; coaching little league baseball, Boy Scouts, and miscellaneous school activities. Following Jason's High School graduation Jason was killed in an auto accident along with 4 of his friends just before entering Washington State University as a Pre-Med student. Wilt had already arranged to move to Pullman, so he continued with that plan in 2009 and lived there for 2 years with his Pug, Caesar, his constant companion and 4 legged therapist before moving to Wenatchee. During this time he met and married his wife, Susan in 2011 and that is where he resided until his death. During their married life they enjoyed traveling: taking cruises to Europe, Alaska, and the Caribbean and taking an 8 week motor home trip across the U.S. with their dogs. They also enjoyed several trips to the Oregon coast, New Orleans and the southeastern part of the U.S. to visit his children. Wilton is survived by his wife Susan of Wenatchee, their dogs Zeus and Chester; son Craig Carter and his wife Hong and children Dee and Mason of Mississippi; daughter Konni Wells her husband Chris of Florida and daughter Kara Price-Williams and her son Aidan also of Florida. Wilton’s life will be celebrated on Saturday, September 18 at 10:00 am at Jones & Jones – Betts Funeral Home. Interment will follow at Evergreen Memorial Park Cemetery. In lieu of flower please make a donation to a charity of your choice.

****Please click link to view service**** https://www.youtube.com/watch?v=pCZk13AWxHM Wilton was born in Pascagoula, Mississippi on April 2, 1937 to Ford and Elma Carter. He passed away on Sept 5, 2021 from cardiac arrest. He was pre-deceased... View Obituary & Service Information

The family of Wilton "Wilt" C. Carter created this Life Tributes page to make it easy to share your memories.